In November 2018, International Children’s Ministries conducted an International Institute of Children’s Ministries in San Juan Opico, El Salvador. Fifty-six participants came together for an intense series of workshops that presented instruction on the biblical foundations of children’s ministry, leading children to Christ, constructing a Bible lesson, and developing a discipleship plan. Little did we know at the time, but this training would open the door to the most ambitious mission giving project undertaken by the ministry.

El Salvador has been named “the most violent country in Latin America,” and its murder rates are the highest in the region. According to the United Nations, on average, 40 children are killed every month, the victims of poverty, civil war, and natural catastrophes. 1.8 million children are a part of the nation’s workforce. 4 out of 10 children live in poverty with over half of all children surviving on less than $1.25 per day. As our National Overseer Bishop Ishmael Ticas has said, “The only hope for El Salvador’s future is to reach the next generation with the Gospel.”

On the final day of aforementioned training, while transporting the teaching team to their meeting venue, Bishop Ticas, shared about his vision for children’s ministry and the outreach program the national office was implementing throughout the nation’s local churches. He explained that local ministries where operating “Centers of Learning” where children could receive tutoring, meals, recreational activities, trade skills development, and discipleship lessons. At the time, he reported that 125 of these outreach sites were operating, with seven churches serving more than 2,000 children daily, and an additional 118 churches serving 2,500 children each weekend. “I am going to change the nation of El Salvador,” said Bishop Ticas, “and I am going to do so one child at a time.”

This report seemed unbelievable to the team but was witnessed firsthand on a follow-up trip by Bishop Shaun McKinley, international director of Children’s Ministries in January 2019, as well as others when visiting the multiple sites. Furthermore, the team learned that this incredible Church of God of Prophecy outreach ministry was fully funded by the government and outside mission organizations!

While on this trip, two pressing needs were identified. First, each location was at capacity and the possibility to double the reach of these programs was possible. Secondly, requirements by the partnering organizations meant that several key locations would need to upgrade or expand their facilities to ensure funding of the programs continued.

In May of 2019, KidServe (formerly known as Helping Hands for Kids) announced Project Build-A-School, a mission giving opportunity for local children’s ministries to support construction and expansion programs for the work in El Salvador. As stated earlier, the goal of $100,000.00 would be the most ambitious project ever undertaken by the ministry. In the ministries fifteen years of mission given support, more than $70,000.00 had been collected for fifteen project enabling outreach ministries in nations such as Indonesia, Kenya, Peru, and the Czech Republic.

On June 27, 2019, the first Build-A-School Offering was received in the amount of $521.25. In December 2021, representatives from International Children’s Ministries traveled to El Salvador to celebrate the completion of the fundraising aspect of the project and tour 11 of the school sites. To date, three sites have been completed with work beginning on a fourth site.

Hacienda Melara – Hacienda Melara is a new church having just been established three years old. After another non-COGOP congregation lost their certification, their school was relocated to this local congregation. The church agreed to take on the responsibility of the school, seeing an opportunity to serve their community’s children and families. As with every stop on their visit, International Children’s Ministries Director Shaun McKinley and KidServe Coordinator Michelle Brooks-Young greeted the children and parents that had gathered and participated in worship led by the children. At each stop, the two also prayed over each school’s staff.

La Libertad – More than 225 children are served at the CDI Trinidad school at La Libertad COGOP. On the recent site visit, the children ministered in song and dance to welcome their guests.


San Bias – More than 261 children are served daily at the Rays of Hope School operated by the San Bias COGOP. At this school, children participate in a rigorous discipleship program, as well as receive professional and skills development. During the pandemic, a highlight of the program was that each child was gifted with baby chicks and feed to start their own chicken farm. Not only were the children learning a skill but the farm also provided families with a sustainable source for eggs and food. The team was also moved to learn that this congregation also works diligently to secure scholarships for promising students to attend university.

De Isla de Mendez – 193 children are served every day at the De Isla de Mendez COGOP School. One of the skills taught to these children is hammock weaving, which provides them with an immediate source of income for their families. In addition to the education programs offered, these children also receive medical services including dental, eye care, and wellness visits. Several of these children have also received critical surgeries through the school’s medical partnerships. On the day of the tour, the children were also receiving Christmas gifts purchased through the church and their partners.


El Jaguey – At the El Jaguey Church of God of Prophecy more than 250 children are served. At this visit a full service was led by the children to include worship, special music and a sermon from Matthew 19:14—all led by the children who are not only being educated at the school but in training to serve as ministers.


Gotera – Returning to Gotera and a dream come true! KidServe Build-a-School funds helped complete this school that serves 150 children! At the Gotera Church of God of Prophecy, our first completed Build-A-School site in El Salvador, funds helped complete construction of the site. Pastor Guzman is a man of vision and isn’t stopping soon. With the completion of this structure he now has his sights on establishing the first high school program in the COGOP in El Salvador.


San Francisco – The San Francisco Church of God of Prophecy serves 165 children daily in their school. When we asked how KidServe could help them, they had a short list of needs-windows to protect from the elements and secure their rooms, fans to circulate the air, and a water tank. Praise God we were able to provide these items through the generous giving of our donors.

Throughout the pandemic, San Francisco didn’t stop serving. They distributed Bibles to children, food packets to the families, fertilizer to farming families, and PPE and sanitizers. They also provided the children with chickens and feed to provide a sustainable source of income and food. They provided wellness checks and health consultations for families. Through a partner they also provided animal and pet vaccinations to student’s families. They provided extermination services to students homes as well.

But that’s not all! They now offer a monthly Ministry time targeting parents. Recently they conducted workshops to the children in how to make laundry soap, safely make disinfectant for home, as well as how to make various jellies and marmalade.

Sports is also a key component of their programs. This year the kids have learned skills in running/track and participated in athlete camps. But the best story is…none of the children had ever touched a basketball. They decided to teach them the sport and entered them in a competition. The team won…bringing home the trophy!


Hacienda Colombia – Hacienda Colombia school is the site of the largest Build-A-School location and project. Funds raised will build a brand new school, cafeteria, office, and dormitories for up to 500 children immediatelt. Earlier this year, International Children’s Ministries and the general presbyter purchased the school a new lawnmower to assist with upkeep of their current soccer field. The field is rented to various groups and the church sells concessions during games as additional sources of income. Hacienda Colombia will serve as the flagship school for the program and potentially serve thousands of children with educational programs and the Gospel.


El Plan de Pino – The Build-A-School tour ended in a fitting way, touring the first church visited nearly three years ago when assessing the needs in El Salvador. Los Esfuerzos Church of God of Prophecy at Plan de Pino was in need of two new classrooms to maintain funding for their school of 300 children, serving 180 families.

The project is now completed, having funded the building of two impressive spaces for the children. Not only did this infusion secure the schools future but also allowed for an additional nearby site of 150 children to be approved for the near future.

The team was blessed to also greet Joselyn Ramos, an orphaned student of the school that the team met on their initial tour. The church and school took on the responsibility of educating and caring for Joselyn after her parents died of renal failure, even assisting with funeral expenses. Today, Joselyn is serving the children of the school by teaching music while attending university with the assistance of the church. On the visit, a few of the schools children, organized by Joselyn, led the small congregation in two worship songs, with the children also playing their instruments.

In addition to the new classrooms, the got to see the gifts purchased for all the children for Christmas, as well as the groceries prepared for each family.


International Children’s Ministries is grateful to Michelle Brooks-Young, KidServe volunteer coordinator, for her efforts to direct the various aspects of these projects. We are also incredibly grateful to the men, women, and children who supported this project through their faithfulness, commitment, and creativity in raising nearly $100,000.00!

Dr. Shaun McKinley serves as the international director of Children’s Ministries, administrative liaison to the general overseer, public relations coordinator, and Prayer Ministries coordinator for the Church of God of Prophecy International Offices in Cleveland, Tennessee. 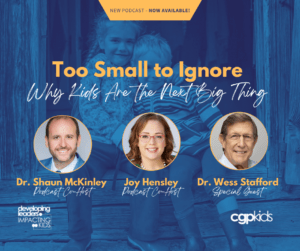